Home/Store/Gimme What I Got Comin' 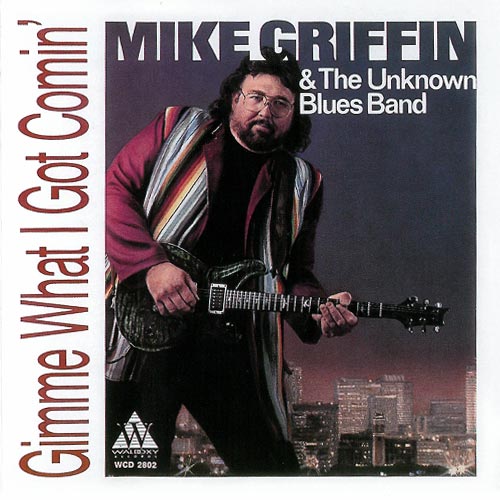 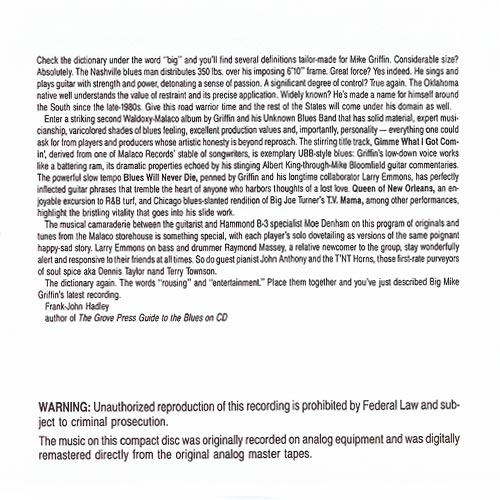 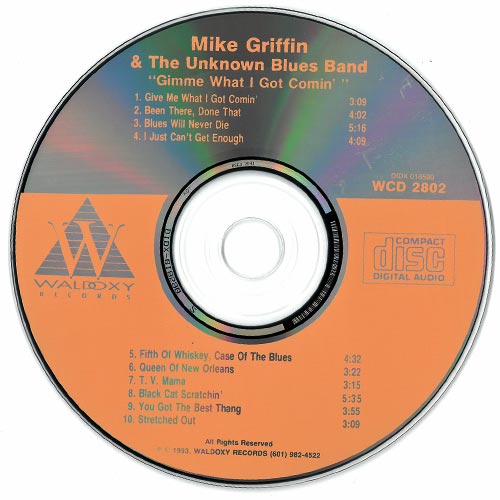 Gimme What I Got Comin'

"Check the dictionary under the word "big" and you'll find several definitions talor-made for Mike Griffin. Considerable size? Absolutely. The Nashville blues mand distributes 350 lbs. over his imposing 6'10" frame. Great Force? Yes indeed. He sings and plays guitar with the strenght and power, detonating a sense of passion. A significant degree off control? True again. The Oklahoma native well understands the value of restraint and its precise application. Widely known? He's made a name for himself around the South since the late - 1980's. Give this road warrior time and the rest of the States will come under his domain as well.

Enter a striking second Waldoxy-Malaco album by Griffin and his Unkown Blues Band that has solid material, expert musicianship, variocolored shades of blues feeling, excellent production values and, importantly, personality -- everything one cold ask for from players whos artistic honesty is beyong reproach. The stirring title track, Gimme What I Got Comin', derived from one of Malaco Records' stable songwriters, its exemplary UBB-style blues. Griffin's low-down voice works like a battering ram, its dramatic properties echoed by his stinging Albert King-through-Mike Bloomfield guitar commentaries. The powerful slow tempo Blues Will Never Die, penned by Griffin and his longtime collaborator Larry Emmons, has perfectly infected guitar phrases that tremble the heart of anyone who harbors thoughts of lost love. Queen of New Orleans, an enjoyable excursion to R&B turf, and Chicago blues-slanted rendition of Big Joe Turner'sT.V. Mama, among other performances, hightlight the bristling vitality that goes with his slide work.

The musical comaraderie between the guitarist and Hammond B-3 specialist Moe Denham on this program of originals and turns from Malaco storehouse is something special, with each player's solo dovetaling as versions of the same poignant happy-sad story. Larry Emmerson on bass and drummer Raymond Massey, a relative newcomer to the group, stay wonderfully alert and responsive to their friends at all times. So do guest pianist John Anthony and the TN'T Horns, those first-rate purveyors of soul spice aka Denise Taylor and Terry Townson.

The dicitionary again. The words "rousing" and "entertainment." Place them together and you've just described Big Mike Griffin's last recording."

And A Very Special Thanks to: "Nigel Paul, Renee Berridge and Buddy Emmons for ideas and inspiration, Bevin Dalton for being there and doing that! And to all the Unknown Fans, Your the Best!! See you on the road!"