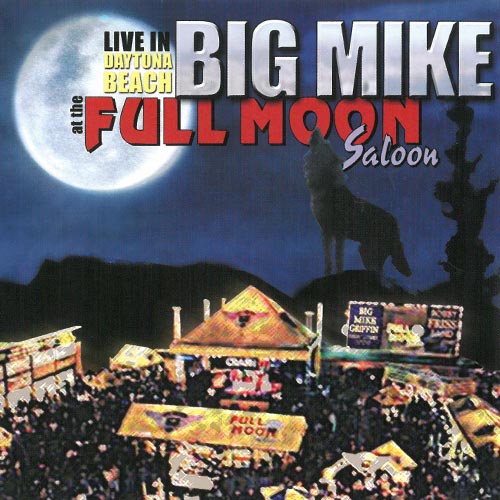 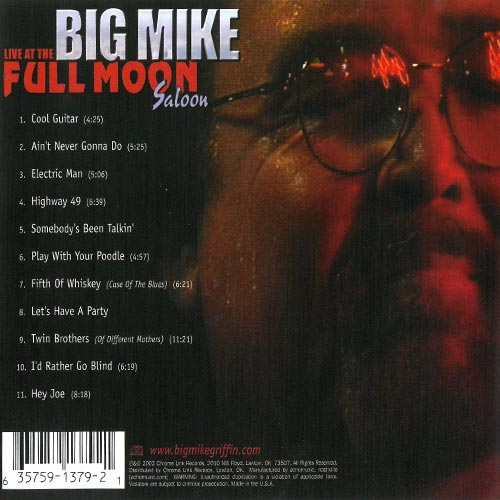 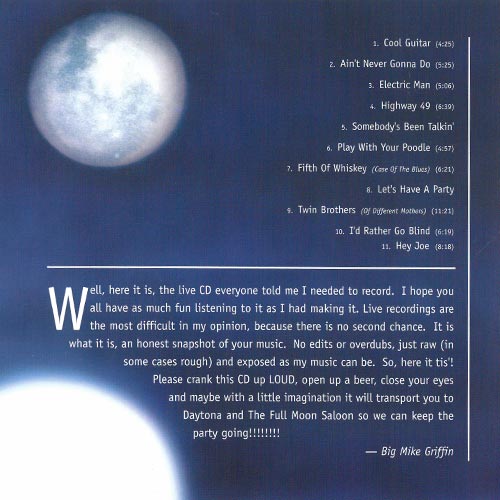 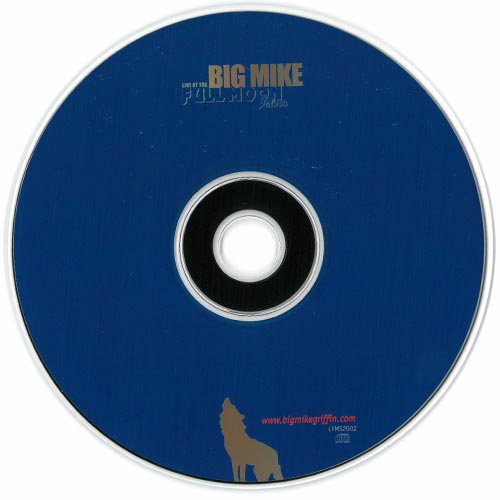 Well, here it is, the live CD everyone told me I needed to record. I hope you all have as much fun listening to it as I had making it. Live recordings are the most difficult in my opinion, because there is no second chance. It is what it is, an honest snapshot of your music. No edits or overdubs, just raw (in some cases rough) and exposed as my music can be. So, here it tis! Please crank this CD up LOUD, open up a beer, close your eyes and maybe with a little imagination it will transport you to Daytona and The Full Moon Saloon so we can keep the party going!!!!!!!!
Big Mike Griffin

In a world that is often all-too plastic, pretentious, and politically correct there are two things that remain real and genuine… tow things that you can always count on to uphold proud, unchanging traditions: bikers and blues! Big Mike Griffin epitomizes both.

Several years ago I had the privilege of interviewing Big Mike for Easyriders magazine. After about ten seconds of conversation with "the biggest man in the blues" it was obvious to me that this guy was the real deal. He understands this powerful, deep-rooted music… he truly loves it. And, maybe more importantly, he understands... and truly loves… his audience.

Playing on countless stages from Daytona's Bike Week to Durango's Four Corners/ Iron Horse Run, Mike has spent years looking out at a sea of leather and tattoos... beards, babes, bikes… and he's right at home. The first question I asked Big Mike what he liked best about playing for crowds that would turn most Barry Manilow types into fear-struck jelly… send most baby-faced boy bands back to their jobs flipping burgers. His answer was just what I expected. "Bikers are the most sincere people that you can find… They're real! They get wild, but you couldn't play for a better bunch... "And it's wild on both sides of those footlights, Mike's live shows aren't for the button-down, cookie-cutter sedan society. This CD proves it.

This is the kind of electric Bacchanal that will give the Clark Griswold's of this world apoplexy… no "soft rock for lovers only"… the timid will be hiding their daughters and praying in closets 'til the tornado passes by. But those of us who understand this holy, 2-wheeled, blues-based brotherhood love it! For those of us who savor the sound of screaming 6 string crying in the night… the raw smells of smoky basement blues bar… the feel of an outdoor arena packed with scooter tramps… the roar of big V-Twins in the background… the disc and the music of Big Mike Griffin is for us.

Mike has a strong, white-knuckled grip on the essence of our sacred alliance for one simple reason; He is part of it… an integral part of something very special and rare… something genuine… something real.

Jim Dunlop Jr., D'addario strings, Chrome Specialties Inc. Ed (Mr. Lucky) Pat, Kelly, Rebecca and Dan, J and P Cycles, Bumpus Harley Davidson, Gregg and Tina Waynick, The Bayport Inn, Bruce Lauren, Lee, Barb, Suzanne, Tammy and Frank (the Don of Weeki Wachee), Michael and Faye, Lore'Bain, Mark and Lisa, Guitar Heaven, Rhonda Woodard, Mike E's guitar ranch, Larry and Jennifer, LOR, Karl and Troy, Frontier Music, The Chrome Link, Bean and Angel, Uncle Ahab, and Johnny Bird and Steve Vines, without whose teamwork and skills this CD wouldn't be possible, and to all our fans and everyone to whom I am indebted, there are just to many of you!